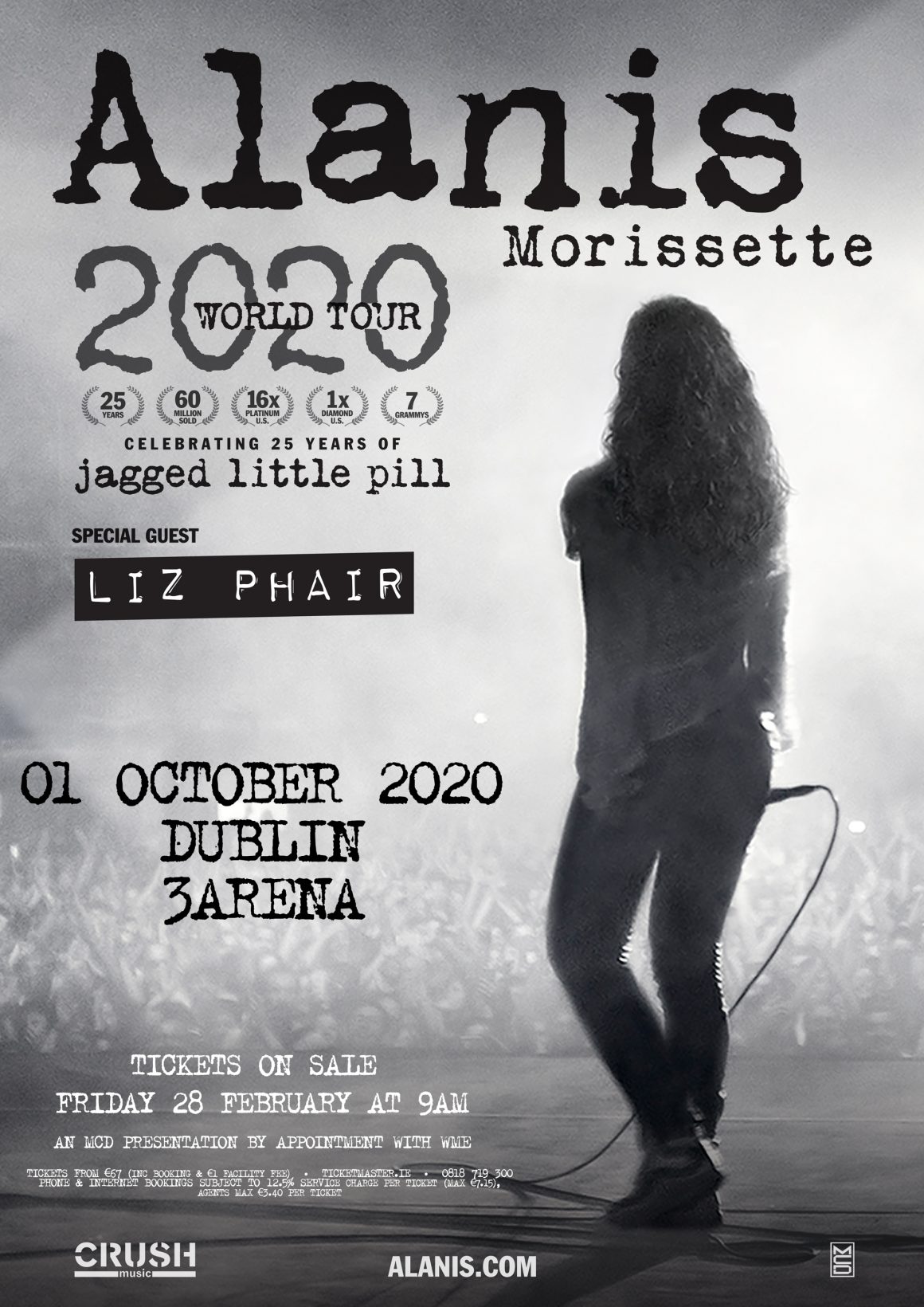 DUBLIN DATE AT THE 3ARENA ON 1 OCTOBER – SOLD OUT

NEW ALBUM “SUCH PRETTY FORKS IN THE ROAD” OUT MAY 1

(Friday, 21 February 2020) Today, seven-time GRAMMY® Award-winner and multi-platinum singer-songwriter Alanis Morissette announces her much anticipated European Leg of her 2020 World Tour celebrating 25 years of Jagged Little Pill and her upcoming album Such Pretty Forks In The Road. The run will see Alanis perform in 13 cities across Europe, kicking off in Copenhagen on 23rd September and concluding at Paris’ AccorHotels Arena on 22nd October. Alanis will be joined by Liz Phair across all dates. Tickets go on general sale on Friday 28th February starting at 9am at https://www.livenation.co.uk For ticket, VIP and pre-sale information, please visit: www.alanis.com

New song “Smiling” was co-written by Alanis and Michael Farrell (Morrissey, Macy Gray) and produced by Alex Hope (Troye Sivan, Ben Platt, Tove Lo). This is Alanis’ second song released from her highly anticipated ninth album, SUCH PRETTY FORKS IN THE ROAD, due out May 1st  and available for pre-order now. The song was originally written for Jagged Little Pill The Musical and is featured in the show and on the official musical soundtrack, performed by Elizabeth Stanley.  Listen to new song “Smiling” HERE.

Tickets for Dublin’s 3Arena on 1 October 2020 are priced from €67 including booking fee and go on sale Friday 28th February at 9am from Ticketmaster.ie

Since 1995, Alanis Morissette has been one of the most influential singer-songwriter-musicians in contemporary music. Her deeply expressive music and performances have earned vast critical praise. Morissette’s 1995 debut, Jagged Little Pill, was followed by nine more eclectic and acclaimed albums. She has contributed musically to theatrical releases and has acted on the big and small screen. Outside of entertainment, she is an avid supporter of female empowerment, as well as spiritual, psychological and physical wellness. In 2016, Alanis launched Conversation with Alanis Morissette, a monthly podcast that features conversations with a variety of revered authors, doctors, educators, and therapists, covering a wide range of psychosocial topics extending from spirituality to developmentalism to art. On December 5, 2019, Jagged Little Pill, The Musical, made its Broadway debut at the Broadhurst Theatre in New York City. Also in December 2019, Alanis released her newest song “Reasons I Drink.”  The track comes off Alanis’ highly anticipated ninth album, SUCH PRETTY FORKS IN THE ROAD, due out May 1st. For more information, see www.alanis.com.

Liz Phair is a Grammy-nominated singer songwriter whose debut album, Exile In Guyville, is considered by music critics to be a landmark of indie rock. She has been a recording artist and touring performer for twenty-five years, paving the way for countless music artists, particularly women, who count her among their major influences. Her deeply clever and often brutally candid songs have been garnering critical praise since she began her career in the early 1990s. This year, saw the release of her critically acclaimed memoir, Horror Stories. In their review, NPR said, “there are so many things to admire about ‘Horror Stories’, it’s hard to list them all. But the real star of Horror Stories is Phair’s elegant but unpretentious writing, which proves she’s as adept at writing prose as she is at writing songs. And anyone familiar with her music knows how great a thing that is.”