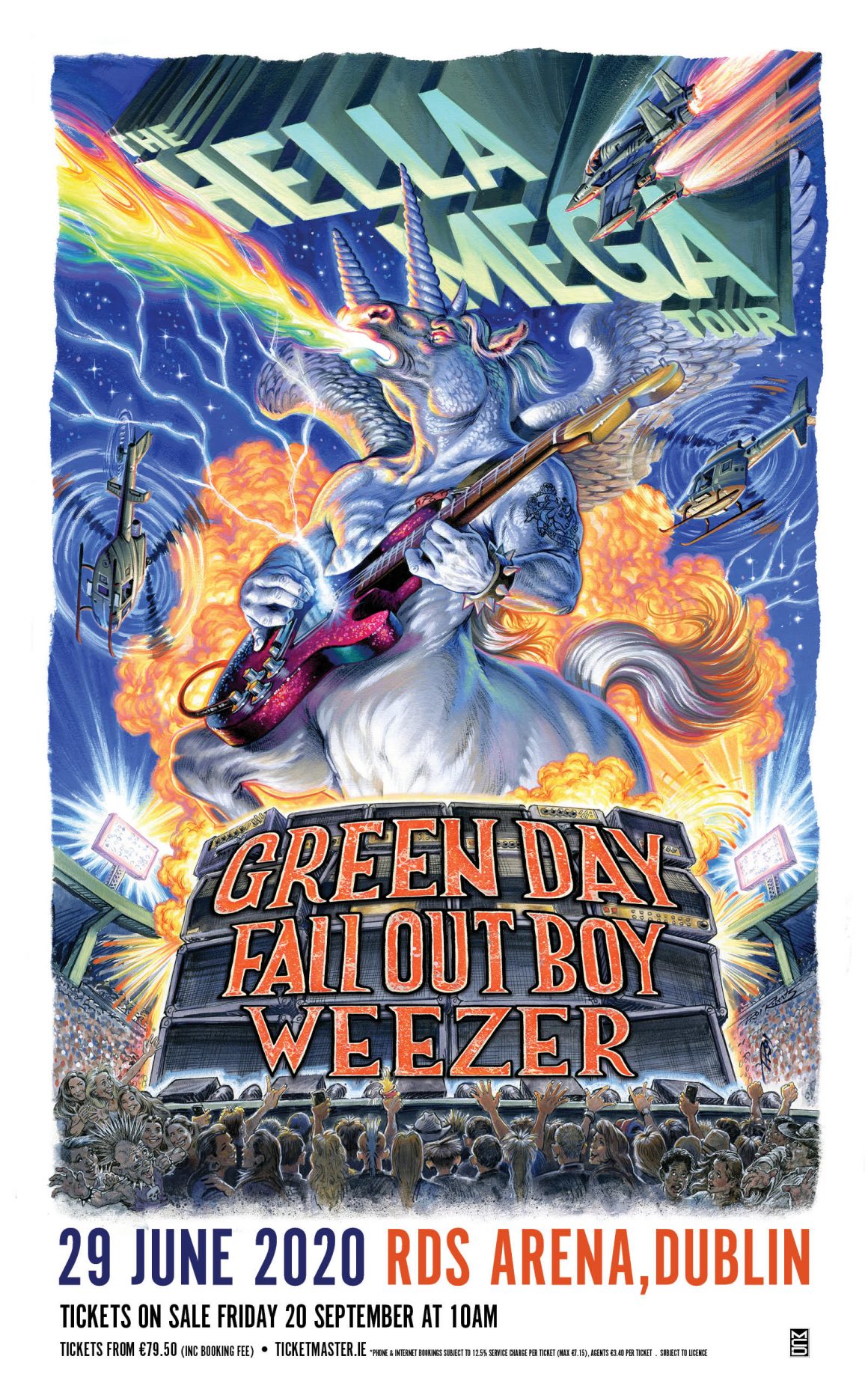 LOS ANGELES, CA (September 10, 2019) – Today Green Day, Fall Out Boy, and Weezer, three of the biggest acts in rock music, announced they will be heading out on the road together for the first time ever on THE HELLA MEGA TOUR presented by Harley-Davidson. To celebrate the tour reveal, all three bands will perform a historic show tonight at the legendary Whisky A Go Go in Los Angeles.

The global tour kicks off June 13, 2020 in Paris and will visit cities across Europe and the UK throughout the month including Glasgow, London, and Dublin. Produced by Live Nation, the 20-city North American outing will bring the bands to some of the most renowned stadiums including Dodger Stadium, Wrigley Field, Citi Field, Fenway Park, and more.  Beginning July 17 in Seattle, WA, the outing makes stops in Houston, Miami, Toronto, New York and more, before wrapping August 29 in Philadelphia, PA.  More dates will be announced. The Interrupters will appear as special guest on the tour.

“Harley-Davidson and rock & roll have been synonymous throughout history,” said Neil Grimmer, President of Brand for the Harley-Davidson Motor Company. “So it’s only natural for Harley to present the most epic, full throttle rock tour in history!”

Concert-goers will see and experience the newest Harley-Davidson motorcycles, including the fully electric LiveWire and their new, exciting lineup of electric bicycles.

Tickets for the RDS Arena, Dublin on 29th June 2020 from €79.50 (including booking fee) go on sale Friday, 20 September at 10am from Ticketmaster. Subject to licence.

In person: From Ticketmaster Outlets Nationwide

In celebration of this announcement, all three artists are also thrilled to announce new singles which will be a first taste of their respective forthcoming albums. All three singles are available now and the respective albums are available for pre-order.

Five-time Grammy Award-winning Rock and Roll Hall of Fame inductees Green Day unleash their brand new single “Father Of All…,” which is the lead track on their forthcoming thirteenth studio album of the same name, out February 7, 2020 on Reprise / Warner Records. Formed in 1986 in Berkeley, CA, Green Day is one of the world’s best-selling bands of all time, with more than 70 million records sold worldwide and 10 billion cumulative audio/visual streams. Their 1994 breakout album Dookie, which sold over 10 million and achieved diamond status, is widely credited with popularizing and reviving mainstream interest in punk rock, catapulting a career-long run of #1 hit singles. Entertainment Weekly calls Green Day, “The most influential band of their generation,” while Rolling Stone attests, “Green Day have inspired more young bands to start than any act this side of KISS, and that doesn’t seem to be changing.” In 2004, Green Day released the rock opera American Idiot which captured the nation’s attention, selling more than 7 million copies in the U.S. alone and taking home the Grammy Award for Best Rock Album. Mojo declared “It’s exhilarating stuff, the kind of record that sets new parameters as to what is possible from a punk rock’n’roll band in the 21st century.” In 2010, a stage adaptation of American Idiot debuted on Broadway to critical and commercial acclaim and now they’re taking the world stage once again with their new album and Hella Mega global stadium tour.  Green Day will also be performing solo dates in 2020- click here for all dates. Pre-order the album Father Of All… here. Listen to their single “Father of All…” here.

Multi-platinum selling, Grammy-nominated Fall Out Boy’s new single “Dear Future Self (Hands Up)” ft. Wyclef Jean will be featured on their forthcoming record Greatest Hits: Believers Never Die – Volume Two, out November 15 via Island Records. The song marks the band’s first new music since the August 2018 release of the three-song Lake Effect Kid EP, a love letter to their hometown city of Chicago that featured the full version of the band’s previously unreleased title track demo along with two new songs “City in A Garden” and “Super Fade.” In January, Fall Out Boy was featured on the gold-certified track “I’ve Been Waiting,” a collaboration from Lil Peep and iLoveMakonnen. Fall Out Boy’s seventh studio album M A  N  I  A  debuted at #1 on the Billboard 200 in January 2018 and garnered a GRAMMY nomination for Best Rock Album. Their worldwide tour in support of the record included a hometown show at Wrigley Field.  Pre-order the album Greatest Hits: Believers Never Die – Volume Two here.  Listen to their single “Dear Future Self (Hands Up)” here.

Multi-platinum, GRAMMY award-winning Weezer’s new single “The End of the Game,” produced by Suzy Shinn, will be included on their forthcoming 14th studio album, entitled Van Weezer, due out in May 2020.  The inspiration for this album derives from the deepest roots of Weezer – metal!  What has metal got to do with Weezer, you ask? In his earliest years, Rivers was a huge KISS fan; Brian was a big Black Sabbath fan; Pat worshipped at the altar of Van Halen and Rush; Scott loved Slayer and Metallica. The last time this vein of harder rock was mined by Weezer was on their much-loved 2002 album Maladroit; Van Weezer is primed to take that album’s sonics many steps further courtesy of producer Suzy Shinn.  “The End of the Game” is Weezer’s first new song since this year’s release of Weezer (The Black Album), as well as their covers album, Weezer (The Teal Album), whose streaming numbers have surpassed 100 million. Weezer has sold 10 million albums in the U.S., and over 35 million records worldwide since their debut album’s release in 1994.  Their catalogue has included such megahits as “Buddy Holly,” “Undone (The Sweater Song),” “Say It Ain’t So,” “El Scorcho,” “Hash Pipe,” “Island In The Sun,” “Beverly Hills,” “Pork and Beans,” and more.  Pre-order the album Van Weezer here. Listen to their single “The End of the Game” here.

Tonight will mark the beginning of a three-day music takeover on ABC’s Jimmy Kimmel Live!, with a first ever TV performance of the new music from Weezer followed by Fall Out Boy tomorrow night and Green Day on Thursday. All episodes begin at 11:35pm on ABC and can be found online at https://abc.go.com/shows/jimmy-kimmel-live. Additionally, each of the band’s new songs were serviced to all Rock and Alternative Radio stations today and will be featured once an hour on a three hour loop all day with Cumulus, Entercom, and iHeart radio chains.

Pre-order Father Of All…: https://greenday.lnk.to/fatherofall

Listen to “Father Of All…”: https://greenday.lnk.to/fatherofallsong

Listen to “Dear Future Self (Hands Up)”: https://FallOutBoy.lnk.to/DearFutureSelf

Listen to “The End of the Game”: https://weezer.lnk.to/endofthegame